This page contains news relating specifically to the Berks Bucks and Oxon Area of NAFAS.  More information relevant to the impact of the pandemic can be found at COVID-19 Update.

See Photo Events for details of the 2021 area photo events.  Time to get creative in the Valentine Time and Easter Bonnet projects.

Following the success of Zooming through Winter, the area has now organised a Zooming into Spring programme of online workshops and demonstrations. See Online Events for more information.

As an alternative to the Deck the Halls flower festival which had been planned for November 2020, the area is organising a virtual flower festival.  Members are encouraged to submit photos of any design appropriate to the current season by emailing them to BB&O Photos.  An album will be set up in  BB&O Photos.  Photos may be submitted any time before the end of the year.  Hopefully next year we will be able to have a real flower festival. 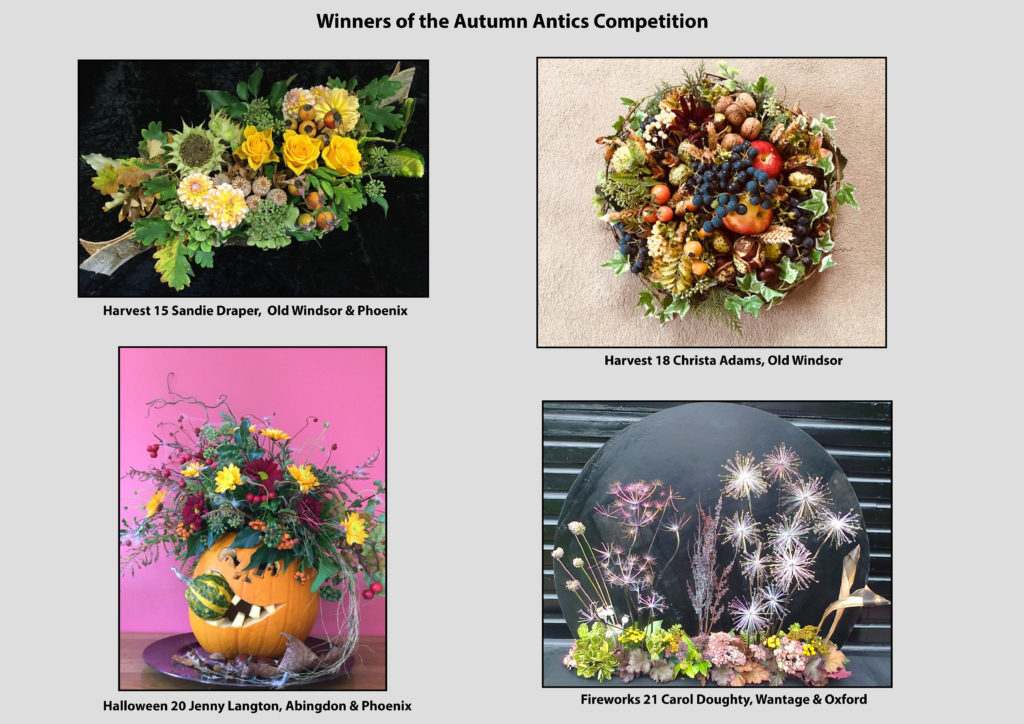 In the Fireworks class the winner was Carol Doughty (FW21)  from Wantage and Oxford Flower Clubs.

In the Halloween class the winner was Jenny Langton (HWN20) from Abingdon Flower Club.

Photos of the winning designs are now in a separate photo album – see Autumn Antics Winners.  Garden vouchers for the winners will be sent in the post.

With the COVID crisis making the usual style of AGM impossible, the practicalities were very different this year,  but worked well.  Reports were sent out in advance. and the online voting form was completed by 37 clubs.  61 members attended the Zoom meeting, including representatives from  36 clubs, and most area officers and reps.  The following area trophies were awarded.  The trophies were shown on Zoom and will be awarded personally the next time there is a practical council meeting.

The Penelope Everett Member of the Year Trophy for the member who has ‘gone above and beyond’ to support their club and/or area was awarded to Alison Vacher for her outstanding work for Sandhurst and Crowthorne Flower Club.  She was one of the first to start regular Zoom demonstrations for her club, and as a result managed to attract new members to the club.

The Heather Barber Rose Bowl for the club which donated the most money to charity was awarded to Maidenhead Flower Club.  They raised £3200.

The Flower Arranger Platter for the Club Flower Arranger Rep who has been most successful in increasing the number of orders in 2020 was awarded to Gillian Crapper from Cotswold Flower Club.

Irene Manson congratulated individuals who had recently achieved their teaching qualification: Carol Bennett, Jennifer Thomson, Stephanie Cornell, Jenny Langton, Melissa Fletcher, Jane Belcher, Kim Wright, Chris Brown.  Certificates will be awarded to successful candidates at the next practical council meeting.  Their names will be added to the Area JDSE list (aka Pink List) so you can book them for club workshops.  Some of the newly qualified teachers are from outside the area but you would still be able to book them.

The Area Media Officer thanked the following members who were stepping down from the Media Team.  Tokens of the area’s appreciation will be sent in the post.